Mobile apps have become the most popular and highly demanded software needs with the day by day rise in the Smartphone users. With the development of the apps comes the testing process as well. Appium testing is becoming highly popular for mobile application testing due to the ease and applicability standards it holds. Let’s have a look at what Appium is and why is it becoming the most used test technique for mobile application testing.

This open source automation testing tool has mainly been developed for automating native and hybrid mobile apps. It implements JSON wire protocol for interaction with the iOS and Android apps. Even though, there are multiple automation tools for mobile testing and automation such as- MonkeyTalk, Frank, Calabash and KIF yet these tools need an additional agent for its compilation of the application code. This makes the tools interaction process with the mobile app a little difficult. However, this is not the case with Appium testing. Appium automation testing gives way towards running automated tests on the actual devices, simulators and emulators.

Nowadays every mobile app consists of a minimum of two platforms- iOS and Android. Every one of these requires a tool that gives way to a cross platform testing process. Using different tools for different platforms not just increases the effort level but also the cost level too. Here is where Appium comes into play.

Appium works on the simple terms of allowing the reusability of the code between both iOS and Android mobile test. This means you will find similar API across both iOS and android platforms. Also, using Appium, you don’t need to modify your app or perform the recompilation of the app. 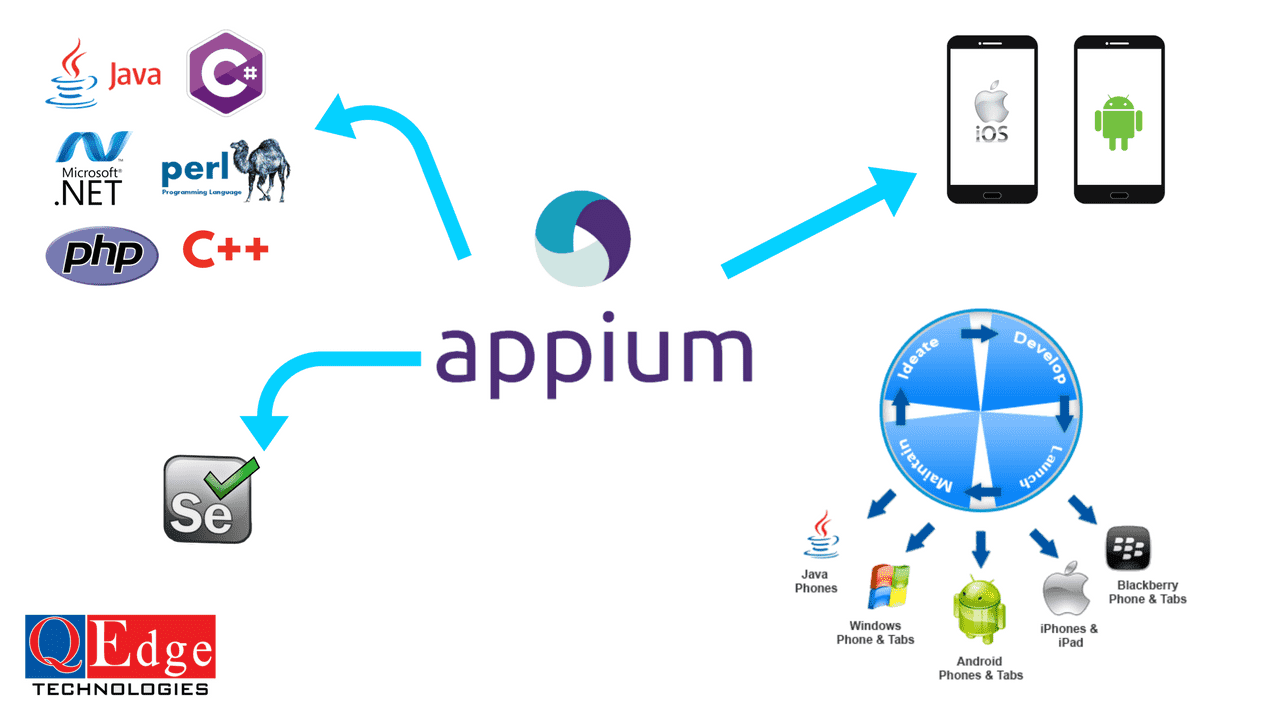 Appium gives the freedom to choose the language one wishes to draft their test in. Language or framework dictatorship isn’t operation while using Appium.

Appium is very flexible to use and thus ropes Safari for iOS platform and Chrome or any other in-built ‘Browser’ app for Android platform that helps in creation of hybrid apps.

With more than 3 million mobile apps being made available for the regular smart phones users, the need for developing the most accurate bunch of mobile apps for both iPhone and Android devices has grown high. The accuracy for these can only be maintained with the use of the right mobile app testing tools in use. In fact, these mobile apps as available in the Apple App Store and Google Play are expected to grow very soon. Thus, to maintain the sustainability standards of these ever growing apps and reduce the complexity of the running apps in the mobile ecosystem, choosing the right adaptable mobile app testing tool and performing the right test becomes a must.

The real apps testing process begins with the identification of the prime OS platforms to support such as- Android, iOS or Windows. At times taking a hasty decision on operating a faster testing process may result into making a call for simple emulator’s usage for those operating systems simulations. Thus, one should focus on a step by step real test process.

Every OS platform has a different set of rules and guideline to follow. Whether it’s Android, iOS and Windows, each one has a varied set of platform guidelines including the way to support different features and the UX standards. Follow them rightly!

The Internet speed turns out to be a prime impact feature on the usage of an app by a user. This means a user with a slow connection might struggle hard with the same app that gives a desirable experience to a user with high speed internet. Thus, make sure to take a test of the app’s performance at both these speeds.

A mobile phone after all is a phone and thus will surely receive a call while your app is running. Don’t forget to take a test against such situations such that your app works well even if a phone call or any other system notification lands into it.

Mostly for a faster processing of the tests, app testing is done on low data loads. Avoid this as you will mostly face a high data load in practical environment. Thus, prefer performing a QA app test with full data load for higher accuracy and robustness.

Apart from the operational tests, designing challenges are most common during mobile tests. The UI design on one screen might appear different on the other, especially for the Android devices. Thus, in order to make your app perform consistently on different screen sizes, make sure to test the app, accordingly.

Localizing on an app in order to map the app as per the local language becomes a big challenge. But, it’s not just the language localization but way more than that as it concerns the localizing of an app too. Thus, performing the related tests on localization concerns becomes a must for mobile apps.

At times the network gets lost and so does the internet connection. Thus, include a test that validates such situations and make sure the App testing ensures none of the problems in this concern.

Thus, Appium training when performed keeping in mind the above mentioned points is definitely going to help, in fact is already proving itself as the most effective mobile apps testing tool, these days!